My last post was March 9.  On the 10th, I did a solo ride starting from Knights Ferry with the intention of going into Oakdale and making a loop around Woodward Reservoir.  Since I was alone, I decided to stop at the bike shop to see if they had a saddle cover.  I ended up listening to one of their employees talking about carbon fiber vs steel vs titanium vs aluminum frames.  I also learned more about wheels and disk brakes.  The decision was made to get a new bike for this summer’s adventure.  But then I had to hurry back to Knights Ferry before dusk so just shot straight back – no loop that day.

My steel frame Colnago is a beauty and has served me well for many years but she’s getting old. It’s getting harder to find parts and that will only become more difficult.  The guys at the bike shop were actually drooling over her and suggested I put the frame and fork in a clear box and hang it in my living room.  I really did consider that but Dan had other thoughts. 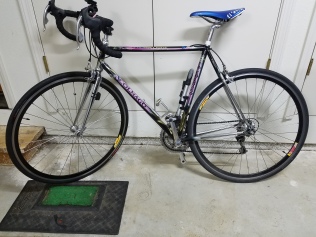 So, a week later, I picked up my new Trek Domane SL with disk brakes.  (So is that Domane like domain or Domane like do-mah-neh’?)  Two days after that I did Ride4Art, a fund raiser for the Calaveras Arts community.  It was a simple out and back, 25 miles, with plenty of climbing and descending.  Since the bike was new and I felt out of shape, I let a few of the climbs intimidate me.

Since then, I’ve ridden from home up to the north entrance of Yosemite, did Big Hill Road, did the Knights Ferry loop that I intended to do back on March 10, did Moccasin-Priest Station-Coulterville-Moccasin ride, et al.  No more problems worrying about the bike and I trust my own legs more too.

The bike has been back to the shop for a different handle bar and stem.  The bar is good but my reach is still too extended.  Another stem is on the way.  If we can get that dialed, I will be soooo happy.

About half of my rides have been solo but I do manage to meet up with one or two (and once, three) friends once in awhile.  While Bill and I were riding in the country around Jamestown, I stopped to get photos of a peacock.  Later I stopped to watch Bill change his flat.  I also took some photos of the nearby bovine. 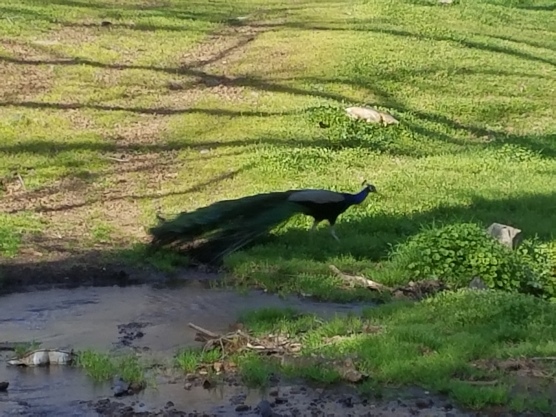 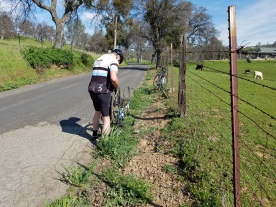 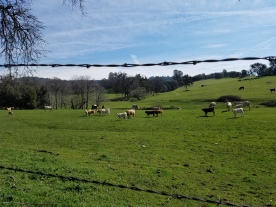