The Delta Century – yup, I finally did a full century. I’ve been playing around with metric centuries plus a bit but finally stopped messing around and did the 100 miles at this event.  By the time I was through, I knew what my friend, Eva, meant when she said she’d not do this one again.  It is too flat (how could that be?) so one is sitting on the saddle the whole distance (that’s what she meant!).  If I wanted any relief from the saddle, I had to stand on the pedals which really isn’t a good way to ride for any distance.

Bonus on this ride was meeting my new friends from Fresno.  The ‘Possums drove up on Saturday, did wine tasting in the Lodi area and then met me Sunday morning bright and early.  Side note: I took their lead and went up Saturday to get a good night’s rest in a motel – that was a joke.  If you haven’t slept in a motel recently, you might not get it.  Anyway, off we went, our little group of four. 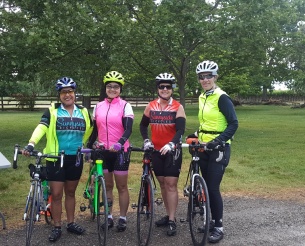 Based on the forecast, I dressed for a cool start to the day. At the first rest stop, I was still comfortable. Even though we were riding in the flats, the wind helped make the ride more of a challenge and it was cool. I started to get an inkling the ‘Possums had a different way of dealing with rest stops than I at the first stop. As I was getting another piece of fruit, they were on their bikes ready to roll.  Oops, guess I need to move faster!

At the second rest stop/lunch stop, I finally removed the extra layers which allowed me more time to actually rest before getting back on the bike. Trying to figure out where to pack the layers was a good exercise. After a couple configurations I got it done but I’m pretty sure I didn’t look very svelte…more like lumpy.  Iris tried not to hover but she wanted to get going even though Maria and Paula rode up just as we were getting ready to leave.  Had it been just me, I would’ve waited for them so we could all ride together again but it wasn’t just me.

Because of the ’Possums, I learned what it is like to take a quick break and keep moving. I had my best total time of doing a century.  Average time including rest stops was 12.5 mph. I usually count on 10 mph so I can see where it makes a difference if you want to finish the ride earlier.

It is three days later as I’m writing this. I had a choice of going for a ride by myself in the Sierra foothills or flying off to Auburn for breakfast. Guess what I chose…