Dan and I started our journey toward Astoria on his birthday. Our first stop was in Glen Ellen at a friend’s home. Betty prepared a sumptuous meal with cheese cake for dessert to celebrate. Their home used to be a bed and breakfast so we had a beautiful room in which to sleep. They also live at the top of a mountain where it is quiet and peaceful. 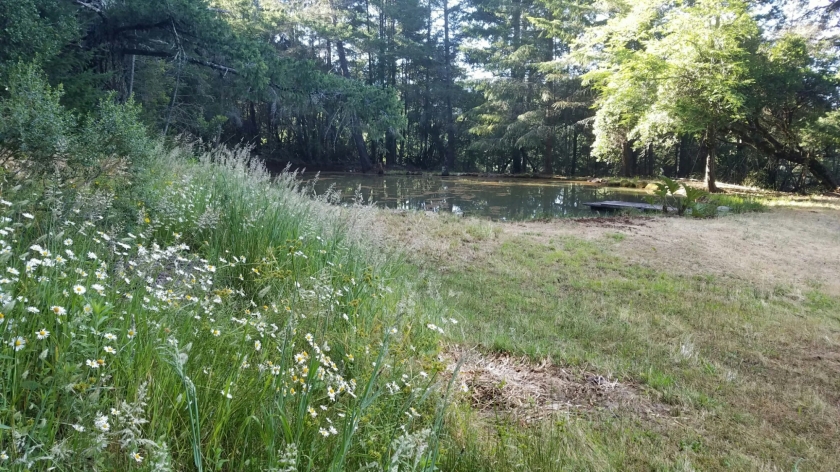 After a wonderful visit, we left and headed to the coast and then north. Once Dan starts driving, he doesn’t necessarily like to stop. So we made it to Crescent City where we found a nice motel on the edge of the ocean.

Listening to the ocean all night was very nice.

Today started out very foggy. Hmmm, maybe the coastal route wasn’t the best choice. As we drove along, the clouds lifted somewhat so we were in low overcast. Depending on where we were, we were back in fog or overcast. Since we have time, we stopped in Newport after crossing this bridge.

To get this photo, we started walking to the edge of a nearby facility. “May I help you?” We turned to find a young man in a Coast Guard uniform speaking to us. Turns out we had walked right past the sign that said no admittance. After I explained I just wanted to take a picture of the bridge, he escorted us to a location where I could get this photo. Then he escorted us back to the gate we had entered with the No Admittance sign. I truly didn’t see it when we walked past it, truly!

As we continued to wander in the area, I felt as if I were at the wharf in San Francisco…Dan said he didn’t believe it, so we just moved on.

Again, we are staying in a motel right at the edge of the ocean. A lighthouse in the distance.