After my trip to the Bay Area, I went home only to meet Jess, Jenn, and Sam the next day at Knights Ferry for a short bike ride together. It was a fun ride with the wind at our back…well, until we turned around. 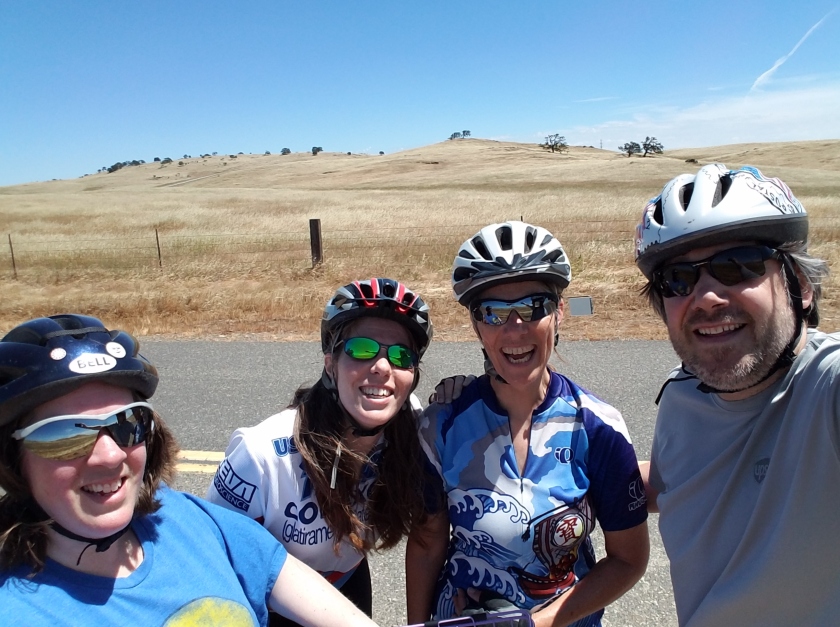 Time always seems too short when with those you love.

Two days later and this crew plus Dan met in Hayward for a breakfast before we flew Jenn away with us for a few days.   Several games of Farkle (which I did NOT win) had us laughing and enjoying the evening.

The next day, we met our friend Ron. I rode on the back of his Harley while Jenn rode on the back of Dan’s BMW. We took a ride through the countryside to Twain Harte where we had breakfast at The Sportsman.  Ron is a good rider. I felt very comfortable with him. So now there may be a little competition on who is the smoothest driver – Ron or Dan.  No comment from me.

The day we flew Jenn back to the bay area, we intended to go to Half Moon Bay for lunch and enjoy the cooler weather on the coast.  Well, it was cooler and foggy just over the airport!  So we couldn’t land and flew to Petaluma instead.  Had a nice lunch there and then went back to HMB to see if we could get in and we could and did.  It was nice and cool as we wandered around looking at the fishing boats and checking out what they had for sale.  As we were doing this, we were all trying to figure out what happened to Jenn’s iPhone. Oh, didn’t I mention that?

When we landed in HMB, Jenn got out of the plane and realized her phone wasn’t in her pocket.  She and Dan both searched the cabin area very thoroughly.  She kept insisting the phone was small enough it could have fallen into the hole needed for the Johnson Bar. Dan was on the ground looking up into the plane (as well as he could).  We went and asked some folks who were working in a hangar for some tools.  High and low, we could not find the phone so now this little worry in the back of all our minds – would the phone block the mechanism that raises and lowers the gear (wheels) on the plane?

We went into one of the eateries for something to drink.  As we were sitting there, Dan said, “It could have fallen out of the plane when Jenn opened the door before we came to a stop.”  Bingo!  We were now on a mission to go back and retrace where we had taxied and hunt for the phone.  And we found it!  So relieved on several levels – no hidden phone in the belly of the plane, found the phone, phone still worked although it was a little scratched up.

After all that, we flew to Hayward to deliver Jenn to her friend Tammy.  Then Dan and I went on home with no further excitement for the day.