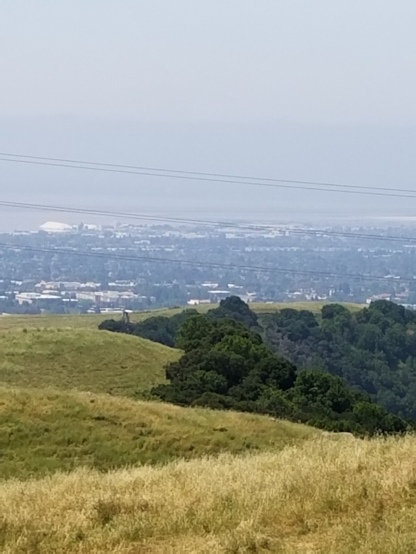 Looking back toward the bay 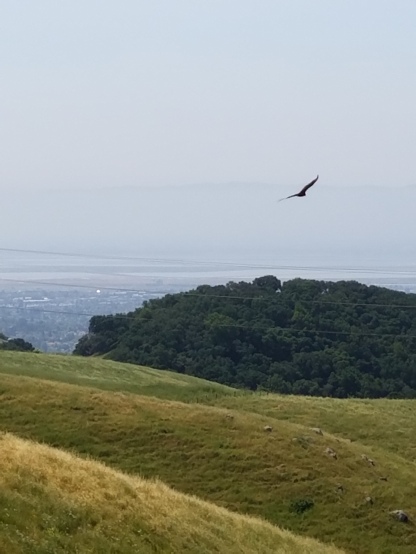 The wonder of Facebook.  A friend who lives in Fremont posted about a new park that just opened up there.  It is in an area I’ve known about but didn’t realize would ever be part of the East Bay Regional Park District.  It just opened last week with limited parking but since it was midweek and midday, there were plenty of open spots to park.

So for some cross training (for me), Sam, Jennifer and I went on a four mile hike in the area.  The grasses were still green, there were wild flowers, ducks, bovine and spiders along the way.  It is in the east bay hills so the trails went up and down but nothing too tough for us!  Although I must confess, my shins were feeling the work out this morning. We only explored a portion of what is available.

The air was dirty so the views were not as incredible as they could have been. On a clear day, one could probably see clear to San Francisco with Mt. Tamalpais to the north and Mt. Hamilton in San Jose to the south.  On some sections of the trail, it seemed as if we were far, far away from the busy, congested Bay Area.  All we could see were rolling hills with minimal evidence man was in the area-nice.

A unique surprise to us was seeing my brother-in-law on the trail.  He had no idea I was in town or where I was going to be and I had no idea he would go hiking in that area so it was weird that we would both be there at the same time.

I am very much enjoying visiting my daughters for a few days.