The day was for playing at Yosemite Nat’l Park in the snow.   I met with friends for a snowshoe trek from the Crane Flat area to the heliport.  The snow had not been disturbed until we came along.  This made for more work as we had to “break trail.” To me, this means lifting the foot higher than normal wearing a big footprint.  Basically one of the walks that could be from The Ministry of Funny Walks.

The area is beautiful and looks different in winter which makes a good reason to go.  I’ve not hiked the trail previously but may try it when the snow it gone just to see how it is then.  As I trudged along, going up and up some more, I had to stop several times to get my heart rate and breathing back to normal.  I finally started thinking, “Are we there yet? I’m not going to give up. Just keep going…one step at a time.” Turns out my thoughts occurred pretty close to the destination which changed my attitude.  Maybe having something to eat helped with the attitude too. 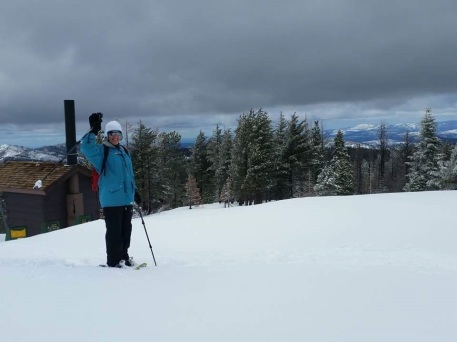 A small group was at the heliport site when I arrived. After looking around and being amazed at the scenery around us, I found the edge of a picnic table to sit on, ate some of my food, drank some water.  The rest of the group finally arrived.  By then, I was getting cold.  I had been sweating on the hike up the trail and the moisture was starting to cool.  I told the leader I’d be meandering back to the start (after all, the trail was pretty easy to follow now).  He asked me to get someone to go with me.  Turns out about five of us were ready to head back.  So, I didn’t meander but did get to visit with some of the others on the return trip.  The return was easy since we’d already tamped down the snow and we were going down hill.

My leg muscles were feeling a bit sore when I first woke up today but are doing ok after some walking around the house.  I think it was a good workout and count it as cross training.  Apparently we did over five miles total.