I’ve been busy the past few weeks:

Feb 15 and 16 I went out for two short rides of 12 miles each. Getting into the climbs again on east Ferretti Rd.

Feb 18 I went to Ripon and rode the Almond Blossom Century. Definitely would do this one again. There was rain as I drove through Big Oak Flat but dry all day for the ride. Weather in northern California has been crazy lately.  The rivers were overflowing along the route.

This ride was almost totally flat but did have headwinds. The day before the winds had been very strong so we lucked out on that.  It helped that I met others willing to paceline or pull to get through that. The ‘pull’ was from a couple on a tandem. They’d stopped to help me as I was trying to figure out why my brake was rubbing and what to do about it. The male worked on the brake issue and the female invited me to follow – worked our Very Well for me.

Best part of the ride was meeting four lovely ladies who’d come from Fresno for the ride.  I rode with two or all four of them during various sections of the ride.  Ended the ride with Maria and Michelle.  Iris and Laraine were waiting for us and we all went out for lunch. Lots of laughter.  Found out they call themselves the ‘Possums. What a great bunch of women!

Oh, 60 miles and there were plenty of almond blossoms.

Feb 25 was Pedaling Paths for Independence starting in Linden. I do enjoy this ride.  The first part is flat but then goes into some rollers – nothing real tough just enough to get my attention.  Bonus on this ride was seeing Therese and Anna at the first rest stop.  They were doing the shorter route so we didn’t get to ride together but it was nice to see them.

Again lucked out with the weather.  Cool all day but I was dressed correctly so it was ok.  I’ve started bringing a simple bag that I can put extra stuff into and wear on my back.  As the day warms up, I take off the glove liners, ear warmers, etc. and throw them into the bag.

I did this ride with no assistance from others. Felt good to feel good when it was all done.

66 miles in same general area of the Central Valley so still saw plenty of Almond blossoms and over-full rivers.

Feb 28 was another local ride with plenty of hills – 13 miles.

Mar 4, a new friend, Lisa, joined me for the Kings River Blossom Bike Ride in Fresno.  One of my motivators for this was the new friends I’d met on Feb 18. Another was a desire to finally do this. I’d seen an article in VIA magazine years ago about the Blossom Trail (which was meant for automobiles but sounded to me like a great bike ride).

Lisa chose to do the 40 mile ride while I planned on the 60 miler with the ‘Possums.  Unfortunately for Lisa, the organizers didn’t seem to have their act together for the 40 mile route. She ended up riding around by herself in unfamiliar territory without a map.

Meanwhile, I had a GREAT ride.  Again, the ride started out flat then had some rollers but after the first rest stop, that changed. I was with Iris and several other ‘Possums that I’d just met. (Turns out Laraine is having serious knee problems, Maria’s back was bothering her and Michelle opted to create her own route so I didn’t get to ride with any of them). The ladies made a great pace line and we quickly made it to the first rest stop.  The rivers in this area were also swollen.  All the grasses are green making the areas we rode through b-e-a-u-t-i-f-u-l.

Then came the climbs.  I geared down to my lowest gear, put my head down and started climbing.  When I made it to the top of the climb, I thought “that wasn’t so bad.”  Ha!  That was just a teaser for what was to come.

However before the ‘REAL’ climb, we went through Wonder Valley and it was a wonder especially with all the green and the running water.  Then came the climb on Elwood Road.  I don’t know how long it was but it took me a long time to get to the top. I was very glad I had the bag into which I put the leg and arm warmers.  Each of us climbed at her own pace and then met up at the second rest stop. 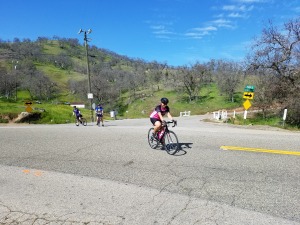 Although we lost elevation on the rest of ride, there were still plenty of rollers.  Somehow I caught up with Iris and Vanessa and we pace lined together until Vanessa decided to wait for those who were behind us.  I almost want to say “mistake!” because Iris is one tough cookie. She set a fast pace and there were times I had to work hard to catch back up or stay up with her.  We did end up riding with two other women we met along the route for a good part of the last section.  I don’t say “mistake!” because I really was pleased to have someone to push me.  It was a good feeling to know I could make it having to do that extra work to stay “on.”

Although the ride was advertised as 60 miles, I only showed 57 on my bike computer.  Still, a good number for the day.

By the way, I was so tired, I fell asleep in the car going home. So glad Lisa was driving. If I’d gone down by myself, I probably would have needed to get a room for the night ‘cause I could not keep my eyes open.

I am very pleased with my progress this past month.  No soreness in the legs today.  However, I wouldn’t want to get back on the bike saddle yet…