Am in Riverton, Wyoming and am adding the photos from yesterday.

Tonight we have poor internet so I won’t be able to post photos…and I saw some astounding scenery today! Although we had to be shuttled through Teton National Park, I still had amazing views of the mountains from the bike. I stopped at one scenic overlook. As I turned into the overlook facing west instead of east, I was overwhelmed by emotion that hit me as I saw the whole Teton range in one view.

Today’s ride was “only” 55 miles for me. I stopped at more than one overlook and a state memorial which added a mile or so to my day. Although we crossed the continental divide, the climb getting there was not nearly as strenuous as yesterday’s climb over Teton Pass. Continental divide is 9,584′ above sea level at this pass.

Just beyond this point, I crossed the Togwotee (TOE-go-tee) Pass at 9,658′ elevation. Togwotee was a Shoshone who guided the Army Corp of Engineers in the 1890s as they were looking for a way to create roads through the area.

Water! I saw so much water today, running off the mountains and into the creeks. The sound was so refreshing as the day got warmer. And I noticed something strange…the water had been running the opposite direction from our way of travel until today. Now it runs in the same direction I ride. Something to do with the continental divide. (wink, wink). Weird how the brain works. 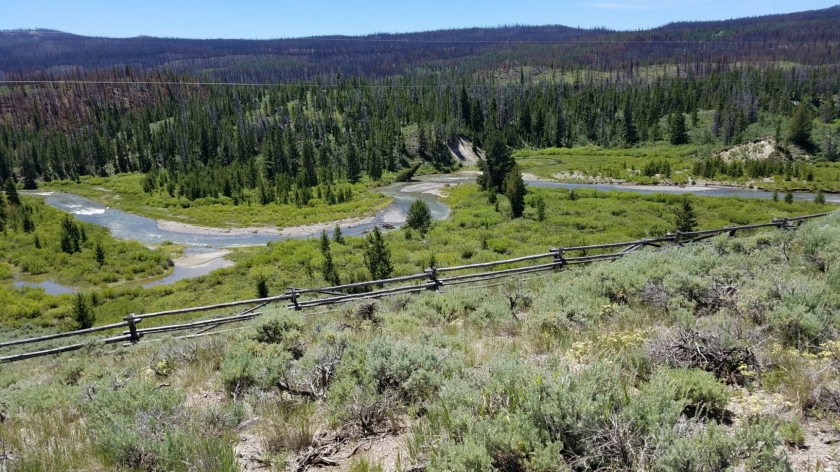 As I was getting closer to our destination of Dubois, I came around a bend and was stunned by the mountains in front of me. Totally different from what I’d been seeing. These were layers of red and white rock that went on for miles. 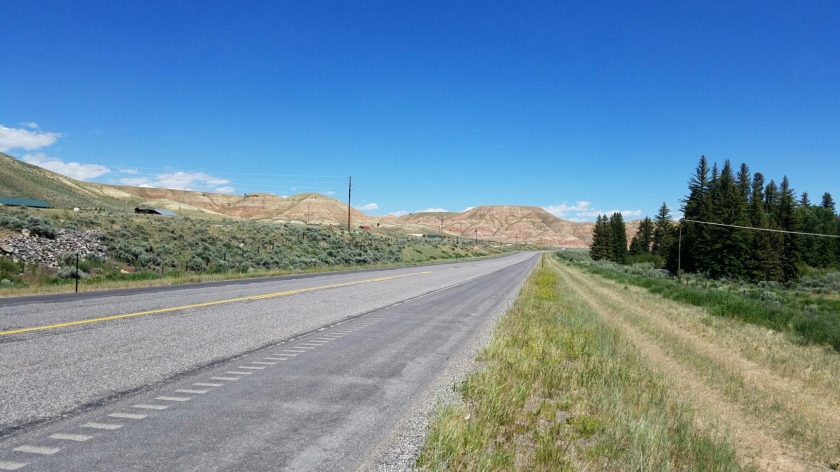 Just about a mile before I got to Dubois, I got a flat! Fourth one so far. Three, including today’s, were caused by wires from the retreads that are on the roads in the shoulder where we second class citizens have to ride. Kim came along and stopped to help me finish the tire change. I kept looking for the SAG truck with the floor pump but no luck this time. We got enough air in the tire for me to limp in to town.
We just missed the Independence Day parade but saw all the horse folks as they were riding back to their trailers. Apparently it was quite a parade with LOTS of military equipment as well as old firetrucks (I saw those too).

Waiting for the fireworks now.