A REAL breakfast today at the Cowboy Cafe in Dubois, Wyoming! The staff handled the hungry hoard standing outside their door 10 minutes early with aplomb. Once the door was opened, we all surged in, found seats and looked quickly at the menu before setting it down in order to get the waitress’ attention. Orders in, meals out. So nice to have something besides powdered eggs, Eggo type waffles, cold cereal, and packaged oatmeal.

As we left town, these were some of the scenes we saw.

Across the street from our first rest stop was this cute little guy.

We followed the Wind River a large portion of the day. I thought it was wind, like the invisible stuff that blows around but began to think it might be wind, like what you used to do to your watch because we crossed it many, many times.

I stopped at the memorial about an Indian war…between the tribes.

At a roadside rest stop, I found a couple of interesting signs about the area.

The route today was 80 miles but almost flat. I ended with a 16+ mph average and that was without any paceline. We followed Route 26 all day. No turns until we got into Riverton. As I neared the end of the day, I was starting to fade. Then I saw Deanna stopped at the side of the road so stopped there too for a break. She was looking across the road at two Pronghorn antelope. Glad I stopped!

Enjoyed lunch with Greg, Bev and their group before heading back to the motel to do laundry and relax. Its so hot here, I just set my cycling clothes outside for about half an hour and they were dry!

I finally found a post office in one of the towns we went through. I’ve seen lots of signs pointing to where the post office is but no indication of how far off the route they might be. With the distances we’re doing each day, I’m not going to go searching… I don’t need any further extra miles. 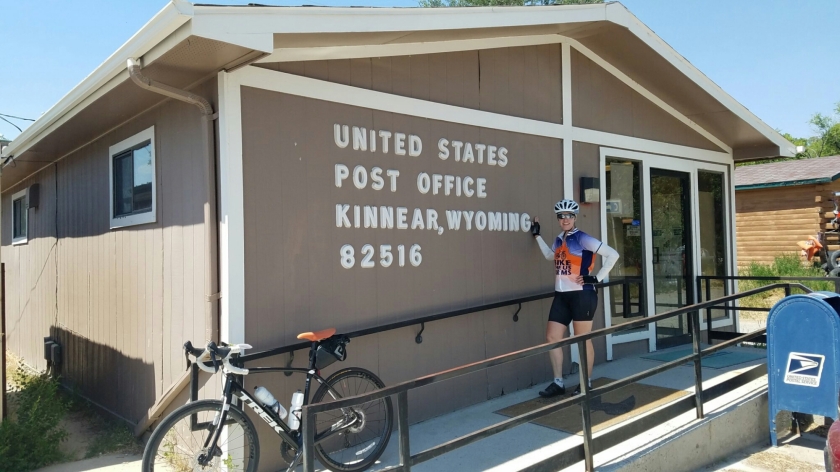